The Following Presidential Collections have been Donated to GIVING1 to offer for direct sale or auction, with a percentage of the proceeds going to Charity.

GIVING1 COLLECTIONS > John Fitzgerald Kennedy
​
The Giving1 Collections team is proud to be selected by the anonymous owner of these presidential memorabilia items and over see the direct sale or auction for this private collection of JFK Memorabilia. The majority of its proceeds will go to our selected Charities.

This Collection of JFK Memorabilia includes hundreds of authentic original stamped photographs, many never seen before, of behind the scenes during the JFK Presidency. It also includes Signed Books, Vinyl Records, and Hand-Written Letters as well as personal gift items from the President. All were given to the donors relative, a former employee at the White House during JFK's term as President. In the late 1990's these items were handed down as a gift of appreciation to a close family member of the former White House employee and have been kept in tact as a collection for over 20 yrs.

The owner of these items would like us to sell and donate a large percentage of the proceeds to one of our verified Charities.

Anyone interested in becoming a Giving1 donor, participating as a "LOVE IS ACTION" charitable contributor by purchasing any or all of this collection, please Contact Us. We will provide secure access to view the images of the items available for direct sale or auction and you will receive information about the history and donor purchase process.

As always, by participating in the purchase of a donated item on the GIVING1 COLLECTIONS website, you become the Giving One's that support Human Rights through creative-holistic mind soul body empowerment programs that instill the power in understanding that peace begins as an action of each individual and that Love + Gratitude = Peace.

*The images below are a sample of just a few of the hundreds of original stamped photographic prints taken during JFK's time in the White House as President of the United States Of America. 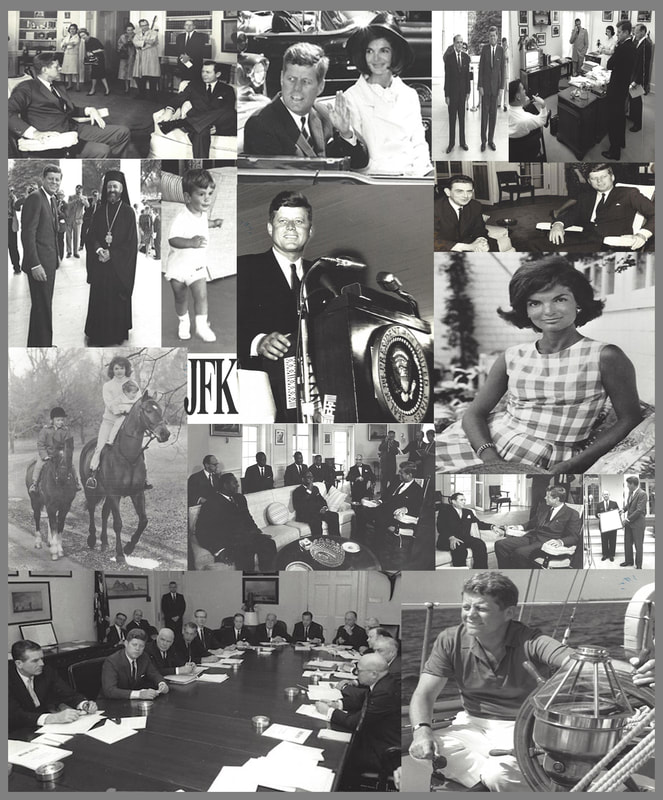 John Fitzgerald Kennedy (May 29, 1917 – November 22, 1963), commonly referred to by his initials JFK, was an American statesman who served as the 35th President of the United States from January 1961 until his assassination in November 1963. Kennedy served at the height of the Cold War, and much of his presidency focused on managing relations with the Soviet Union. He was a member of the Democratic Party who represented Massachusetts in the United States House of Representatives and the United States Senate prior to becoming president. Kennedy was born in Brookline, Massachusetts, to Joseph P. Kennedy, Sr. and Rose Kennedy. A scion of the Kennedy family, he graduated from Harvard University in 1940 before joining the United States Naval Reserve the following year. During World War II, Kennedy commanded a series of PT boats in the Pacific theater and earned the Navy and Marine Corps Medal for his service. After the war, Kennedy represented Massachusetts's 11th congressional district in the United States House of Representatives from 1947 until 1953. He was subsequently elected to the U.S. Senate and served as the junior Senator from Massachusetts from 1953 until 1960. While serving in the Senate, he published Profiles in Courage, which won the Pulitzer Prize for Biography. In the 1960 presidential election, Kennedy narrowly defeated Republican opponent Richard Nixon, who was the incumbent Vice President.